The earliest evidence of human activity in Parkend comes from a hoard of over 900 Roman coins, dating from AD300 and found in 1852. A lack of other artefacts would suggest, however, that the Romans probably didn’t settle here. History is then silent until 1278 and the first record of a Royal enclosure called ‘Wistemede’, later called Whitemead Park. The village’s location, at one end of this park, is how Parkend derived its name.

In 1612 James I built a charcoal-fired blast furnace and forge at ‘Parke End’, bringing with it the first real settlement. ‘The King’s Ironworks’ proved horrendously inefficient and contributed to a serious timber shortage in the area. It closed in 1674 and it seems that occupation of the village ceased until new dwellings appeared after 1747. Part of the Fountain Inn dates to 1767, and is the oldest surviving building in Parkend.

As the Industrial Revolution began to take hold, the Crown resolved to dilute the Foresters’ Freemining rights and open up the area to free-market forces. Then, in 1808, Parliament passed the Dean Forest Timber Act in response to a shortage of naval timber. The act included the provision to enclose 11,000 acres of woodland and replant them with oak trees. Responsibility for its execution lay with a young, newly appointed, deputy surveyor named Edward Machen. 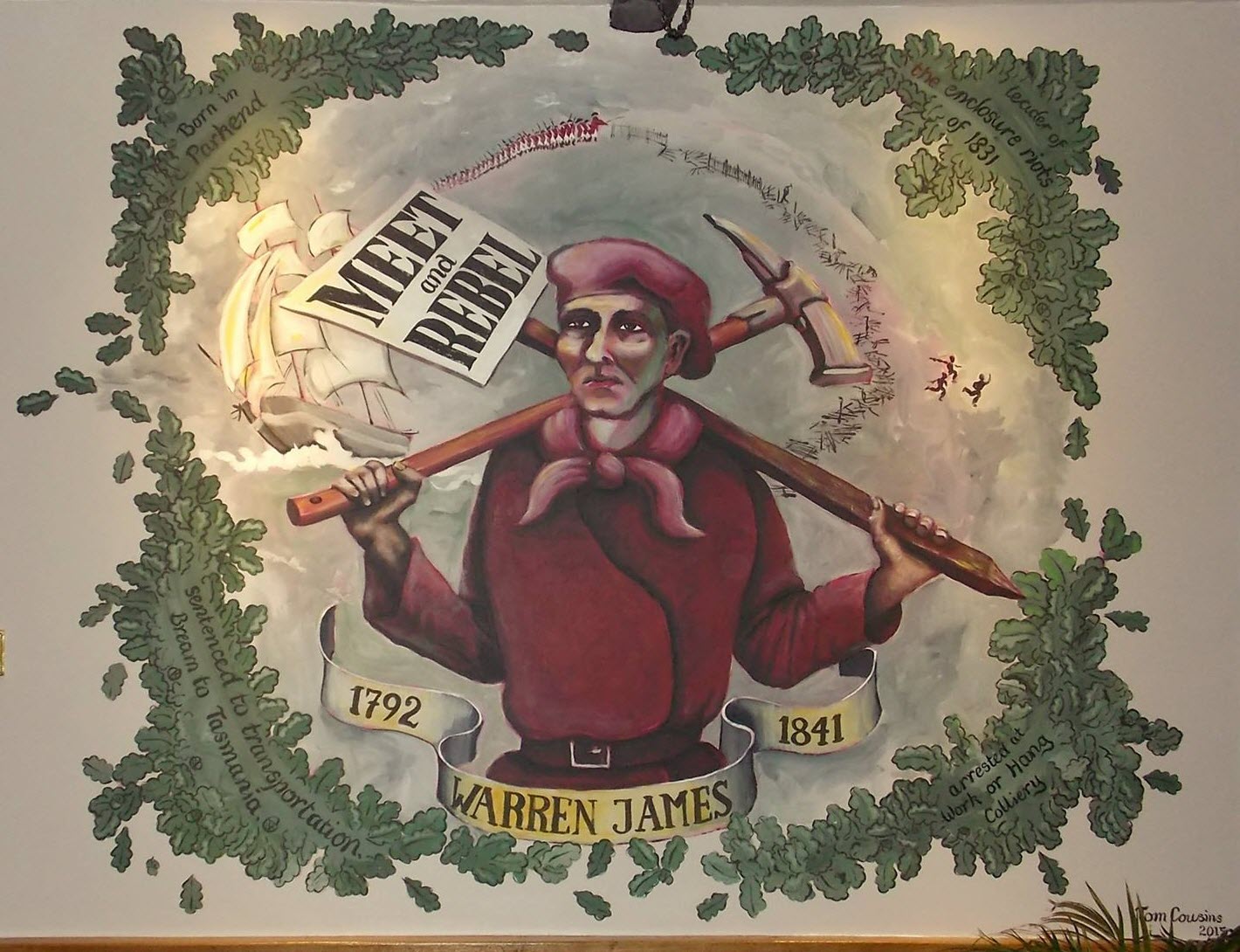 In 1814, Machen enclosed Nagshead; the main woodland of Parkend. By 1816, all 11,000 acres had been enclosed and Machen took up residency at Whitemead Park, in Parkend.

Unable to compete with the outside industrialists, and denied their ancient rights to collect timber or graze animals in the enclosed areas, many Foresters descended into abject poverty. Unrest grew and Warren James emerged as a populist leader. James had been born on the southern edge of Parkend. He and Machen knew each other well, as both were regular churchgoers at Parkend.

On Sunday 5th June, 1831, the two held a public meeting outside the church gates, but they could agree on nothing. Three days later the two men met again;

This time, James, leading a group of around 200 Freeminers, proceeded to demolish the enclosure at Parkhill, between Parkend and Bream. Machen, and around 50 unarmed Crown Officers, was powerless to intervene, so he returned to Parkend and sent for troops. On Friday, a party of 50 soldiers arrived from Monmouth, but, by now, up to 3000 Foresters were tearing down fences, so the soldiers returned to barracks. On Sunday a squadron of soldiers arrived from Doncaster and the next day, another 180 infantrymen arrived from Plymouth.

The Foresters’ resistance soon crumbled and most elected to voluntarily rebuild the enclosures, rather than be charged with rioting. James was tried and sentenced to death, though this was commuted to transportation to Van Diemen's Land (Tasmania) in October 1831.

Local petitioning led to a pardon five years later, but he never returned home, nor it seems, did he ever contact his friends or relations again. He died in 1841 aged just 49. Ironically, by the time the trees were large enough, Royal Naval ships were no longer being built of wood and many of Machen’s Oaks are still growing in the woods around Parkend