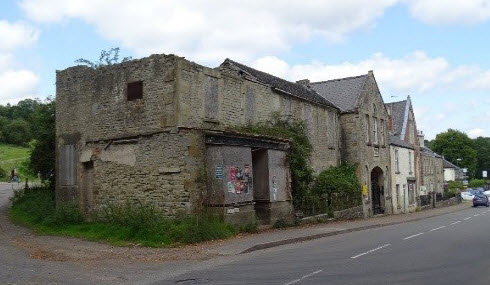 As you enter the charming forest village of Parkend from Coleford,  the first building that greets you is a derelict building hiding what was once a striking forest building known as Shewards Shop. It was well known for the sweets and other goods it sold and on the upper floor was a very popular snooker hall. When Mrs Sheward died, the building became subject to an inheritance dispute which has dragged on for nearly 40 years and the building has been completely neglected. It is now a dangerous ruin, with no roof and very little evidence of the original building apart from the striking façade and some side walls. It is completely unusable, has formerly had squatters and fire damage; it is also causing water ingress at the village Memorial Hall next  door.

At a meeting in 2017, Parkend residents were in full agreement that after multiple attempts over 20 years to get a solution, this issue has gone on long enough and are now looking to gain ownership of the building.

This would allow the Memorial Hall to extend into basically a new building to provide a village community and cultural centre with flexible modern facilities to be used by many groups and ages. The aim would be to address the needs of current residents but also to make it suitable for the next generations.